The meteorological effect is the impact of weather events on the atmosphere of the world.

In PV plants, the input is the value of radiation from the sun, and its output is electrical energy. While generating electrical energy, many meteorological factors are affecting the performance of the PV plants. These factors lead to losses in the production of electrical energy. Investors want to minimize these losses to avoid financial damage. Losses can occur due to meteorological factors as well as the design of solar PV plants. These can be shading, material quality, incompatibilities between parts, and inverter losses.

The losses that may occur in a solar power plant are shown in the image below.

The maximum electrical energy that can be produced in solar power plants can be determined. If the plant produces less energy than the maximum energy required, it means that there are losses in the plant. We can classify these losses into three main headings.

It is a situation related to the angle at which the solar panel is placed. The greater the amount of solar radiation coming into the photovoltaic module, the more energy the panel will produce. Minimizing the losses, that may occur in the radiation value received by the panel, will provide an efficient solar power plant. 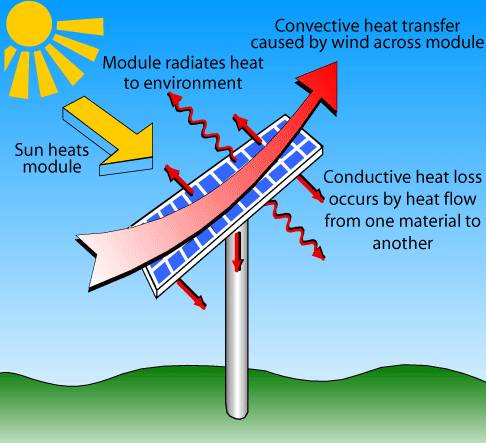 It is the losses caused by the deviations of the solar radiation on the earth’s surface until it reaches the solar panel.

It is the losses caused by the reflection loss on the PV module before the radiation reaches the cell. In the photovoltaic modules, the reflection is minimized by using protective coatings to prevent this reflection. According to the data obtained under normal irradiation conditions, the modules reflect 4% of the incident radiation.

It is the shading caused by factors such as mountains and hills in the area where the power plant is located. Horizon shading is generally equal at all points of the plant.

The shading of the solar panels on other modules is called modules row shading.

The amount of solar radiation coming to the solar panels decreases due to the dirtiness of the surfaces of the panels. For this reason, this effect is called the dusting effect. In this case, the panel surfaces should be cleaned until it can absorb sunlight sufficiently. Losses caused by snowfall are evaluated under this effect also.

There are designated parameters that need to be paid attention to while designing in the PV plant. There are losses due to the design parameters. The differences between the catalog values and actual values of the solar panel cause the deviations in the panel technical features. These deviations cause system losses. 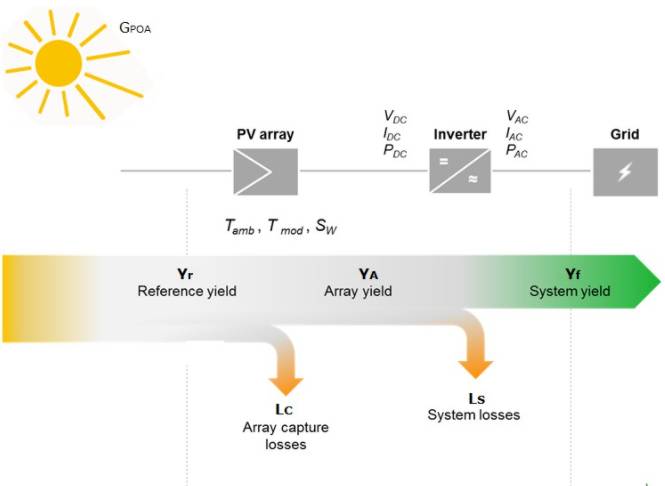 They are the losses seen in the power output of the PV plant due to low irradiance.

Environmental effect is relevant to the panel’s damage due to the weather condition. If PV modules are at different operating temperatures or exposed to different irradiance values, we can consider this loss as a loss of incompatibility.

Cable losses are caused by ohmic losses in DC and AC cables used in photovoltaic systems.

The inverter losses are calculated through the inverter efficiency curve, considering the energy consumption of the inverter at standby condition as well.

Standards such as European Standards are used for DC/AC power cycle efficiency calculation. DC/AC conversion losses in the inverter depend on the type of power layers and operational characteristics such as conduction and switching of semiconductor, magnetic elements, and capacitors used within the PV inverter.

Weather Stations Reduce the Losses to the Minimum Level?

It is necessary to anticipate losses before preventing them. Anticipating losses in advance will help to obtain the maximum efficiency from the system. Otherwise, the desired performance and income will not be obtained from these costly systems. So, Weather Stations can be the optimal solution.

The Weather Station used in these systems provides data. As a result of evaluating these data, the performance of the system operation is evaluated and losses are minimized.